So, when a man who’s spent his share of time in homeless camps breathes his last, where do you have the memorial service?  At the local soup kitchen he loved, of course.

That is how I ended up on a Sunday afternoon at the Rose of Sharon soup kitchen/thrift store, celebrating the life and story of David, who—battling colon cancer—died 49 years young.  I had talked with David two or three times because he was a roommate of my friend, Joe.  I liked David.

Listening to the “David” stories friends shared, I liked him even more.  And it wasn’t the pull of the “he’d do anything for anybody” memories.  Frankly, it was more the honest stories about stubborn, fighting, scheming, “try anything” David that endeared me to him.  It also didn’t hurt that his favorite story in the Bible is in my “top two” as well.

Jesus tells a story about a Father with two sons—one who strains to make sure he does everything “right” and another boy who runs away from home and blows a third of his father’s fortune on a partying escapade that would make Vegas proud and ultimately leave a young kid bankrupt, strung out and homesick.

Going home was a fantasy of course.  But just maybe he could talk his dad into hiring him as a minimum-wage farmhand.  With that wisp of a hope, he trudged back the familiar road toward home, nervous as hell.  Why had he made so many terrible decisions?  He deserved the fate he would surely receive.

Only he didn’t receive it.  His crazy dad, spotting him a quarter mile away, runs at him full speed until—reaching him, out of breath—he hugs his boy until it’s almost awkward.  He immediately launches the party he had been planning in his head ever since his son left home.  On short notice, he invites every person he can think of to come to the party.

Why?  Because the son is precious to the Father.  The boy matters.  He matters not because he is employed or sober or successful or moral or wealthy.  He matters…period.  He is valuable and he is loved and he is significant.  When people matter, you celebrate them.  You invite people to a celebration party because the guest of honor matters.  And people come…when someone matters.

God is always inviting us to join him in being with people and celebrating their deep value.  Why?  Because people lose sight of how much they matter.  Or they come to believe the cues that their value is related to their income, their looks, their success, their (fill in the blank).  They…we…need to be reminded we matter.

Sitting in the soup kitchen prior to the service, I was chatting with a guy I’ll call Bill, a friend of David’s from their frequent soup kitchen dinners together.  Bill watched wistfully as the room filled with dozens and dozens of people.

He turned to me, eyes misting, and said, “When I go, I hope this many people come out to my service.”  And that’s when it hit me.  Every person who walked through that door was casting a vote: “David matters.”  Bill was not expecting high voter turnout for himself.

“I’m nothing,” he muttered almost offhandedly, bolstering his claim with a quick “I don’t have a job and I…”  I stopped him mid-sentence.

“It has nothing to do with where you live or whether you have a job.”

He looked almost as if he believed me and said, “I think I’ll write that down.”

Every single day, we have the chance to tell someone that they matter.  On rare occasions, we speak it.  Much more often, we show it…by being there.  The choice to pause, the choice to listen, the choice to change plans, the choice to be with: We cast our vote.  You matter.

And a Father in the heavens could not agree more. 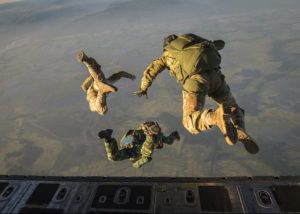 Jesus and God life and death

Every Belief Has a Because