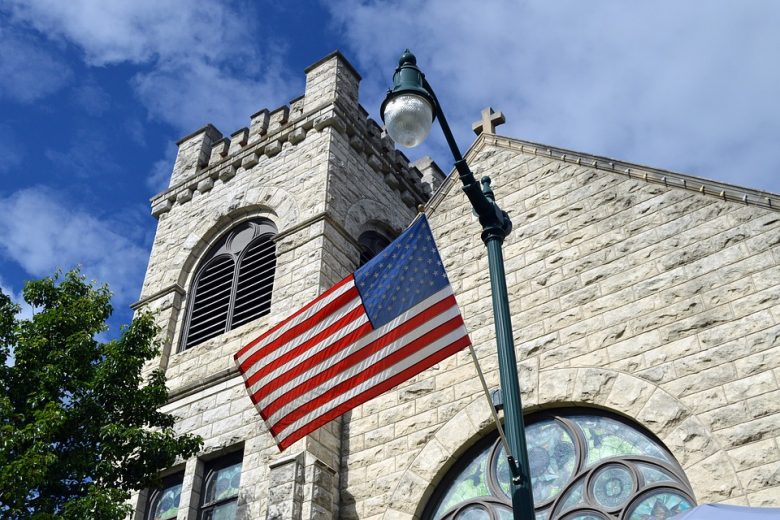 This is a heartfelt word to my Christian brothers and sisters. If you’re reading this, I consider you brave, because I’m finding few Christians who wish to consider whether their devotion to country could ever become unhealthy, much less evil. It’s inconceivable. So I thank you for giving me a 5-minute read. Below are two quotes, and I’d like you to reflect on what they stir in your heart.  I’ll then share what they stir in mine.

The first quote is from the Holy Bible: “And let us run with perseverance the race marked out for us, fixing our eyes on Jesus, the pioneer and perfecter of faith. For the joy set before him he endured the cross, scorning its shame, and sat down at the right hand of the throne of God. (The Bible, NIV, Hebrews 12:1-2)

The second quote is from the Republican National Convention a few months ago. Finishing his keynote speech with a rousing flourish, Vice President Pence said: “So let’s run the race marked out for us. Let’s fix our eyes on Old Glory and all she represents. Let’s fix our eyes on this land of heroes and let their courage inspire. And let’s fix our eyes on the author and perfecter of our faith and our freedom and never forget that where the spirit of the Lord is, there is freedom. That means freedom always wins.”

Please indulge me and re-read both the Scripture quote and its amended version. Only this time take note of what words are in each quote, and what words are not. (I’ll wait for you to finish.) Hmm. The words that are added are “Old Glory” and “nation of heroes”(presumably a reference to America). Key missing words are “Jesus” and “enduring the cross,” among others.  This staggers me.  Are you concerned? Could it be you’re wrestling to find a harmless explanation?

If the Vice-President’s adaptation of Scripture doesn’t concern you, something’s wrong. Is this too strong?  If you heard anyone quote that verse in any other context and remove the name of Jesus, you wouldn’t be bothered? Angry?  I’ve heard passionate words about “those people” who remove Christ from Christmas with new terms like X-Mas or Winter Celebration. What about removing his name (along with the cross) from a Bible verse?  Only it’s worse than that. Jesus and cross are gone, but country and flag fill in the blanks.  If you heard anyone amend that verse with: “fixing our eyes on Allah” or “fixing our eyes on Russia” or “fixing our eyes on science,” how would you feel? Does the word “heresy” come to mind?  Does the word “heresy” come to mind with “fixing our eyes on Old Glory”? Why not?  Is it possible Old Glory and Jesus have gotten so close, we can no longer separate them?

Isn’t it a grave danger to put anything next to Jesus as an equal? Historically, we’ve called this heresy or syncretism or a false gospel. Syncretism is the attempt to combine following Jesus with some other religion or valued cultural practice in a way that gives them equal value or love.  This resulting mix is a corruption or dilution of the true gospel. A false gospel. So, for instance, the church I grew up in decried a “social gospel,” concerned that an emphasis on caring for the poor might subtly overshadow the call for people to trust Jesus. Where’s our concern about a “national gospel?” How are we OK with the second-highest ranking leader in America, a Christian, at a political rally, taking the Bible call to trust and worship Jesus who endured the cross and replace that with a call to look to our flag and our country of heroes?  It’s not OK. It’s a form of heresy. Idolatry. Tragedy.

“But Roger, Vice-President Pence is a good man who loves God.”  I believe you, and that’s exactly why I’m writing this.  One deadly lie in our world is that evil ideas or values or actions are always obvious, and they can’t show up in good Christian people. The Bible makes a different case, and so we read, “the heart is deceitful above all things, and desperately wicked. Who can know it?” (Jeremiah 17:9 KJV) The point here is that evil is pervasive, that we can deceive ourselves, and that we can be blind to it. It’s why James could warn good Christian church-goers that they had become “judges with evil thoughts” (James 2:4) and not even see it.  When we believe that good Christians can’t be badly mistaken, it muffles the voice of the Spirit of God.  And we, who warn others against putting anything too close to God, can end up doing the very same thing. And we have.  I have.

You may counter that the Vice President made a word exchange that you never would have, but what are our actions, passions and priorities saying?  Let’s press in to why Jesus endured that cross in the first place. It was to save precious evil people like us (and our enemies) and to free us from our sins. Much to Israel’s shock 2000 years ago, He did not come to save or free a country. We’re worried that some (fill in the blank) group is going to “take over” our country, but for Israel, that had already happened. And it wasn’t Jesus’ concern. When He returned to the Father, Rome still ruled Israel. Jesus’ concern was never a political kingdom—saving a country. Political freedom. His kingdom was about saving people. Spiritual freedom. A home with the Father. That kingdom was His singular passion, and nothing else got close.

Can the same be said about us? Old Glory represents a kingdom. So does Jesus. How would we know if those kingdoms have gotten too close? Evaluate your passion and your posture. By passion, I mean what you love, what you’re talking/writing about, what keeps you awake at night. Question: What grieves or worries you more: that our country might be overtaken by (fill-in-the-blank) or that those people threatening “your” country might miss freedom and life in Jesus? What matters more: your country or those dear people? Which kingdom are you thinking, writing, posting, praying or talking about most? It shouldn’t even be close.

These two kingdoms have different, often competing, postures—captured powerfully at Calvary. The posture of Jesus’s kingdom is compassion, serving, forgiving and surrender. It’s no surprise that Jesus enduring the cross would disappear from a political speech; it’s a posture of surrender, not force.  From that cross, Jesus forgave haters and killers, welcomed an insurrectionist into His kingdom and convinced a hardened Roman commander that a dying man was the Son of God. Jesus’s kingdom was in full glory! Oh, but another kingdom was at work that day—Rome and Israel in an awkward alliance, each looking to protect its country’s place and power. Their posture? Fear, threats, deceit, harshness, control and even killing.  I’m wondering which posture people are most experiencing from Christians right now. Actually, I’m not wondering. I’m grieving.

In pursuit of a political kingdom, Vice-President Pence exchanged old glory for the old rugged cross, but that’s not my gravest concern. I’m most concerned that we didn’t notice because we’d gradually made the exchange long before.

[Feature photo by quinntheislander on Pixababy.com]