When God Agrees With You on Everything 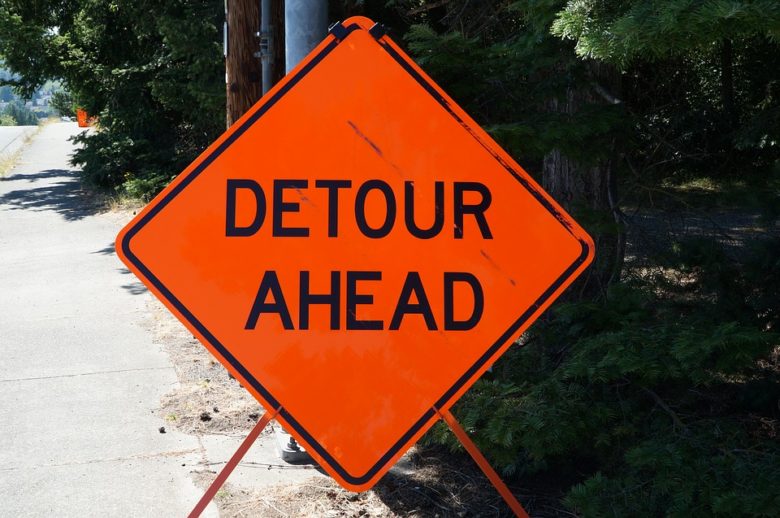 This is a word we don’t use very often. Yet it was one of the first instructions Jesus ever gave.

From that time on Jesus began to preach, “Repent, for the kingdom of heaven has come near.” Matthew 4:17

I’m a frequent traveler through Atlanta, GA. Interstate travel through Atlanta is almost always a challenge. It’s a nightmare when there’s a fire with billowing black smoke burning beneath the interstate. Fortunately, this is not a common occurrence, but it happened on March 30, 2017, late in the afternoon. As a fire grew beneath an I-85 overpass, troopers began to advise drivers to turn around, because they were concerned about the integrity of the overpass.

The troopers were asking drivers on I-85 to repent. The road you’re on will lead to trouble; for your own good, you need to turn around and take a different route. It may look fine to you, but it’s not safe. Turn around. Repent.

I wonder what I would’ve done if I’d been driving down that stretch of I-85. I know for sure that I wouldn’t have wanted to turn around on I-85. It would be a nightmare to find a way to get around to the other side. I also wouldn’t have been overly concerned about the fire. I mean, what’s a fire going to do to concrete? If allowed by the trooper, I probably would have driven on ahead. And this book wouldn’t have been written. I’d be dead. Minutes after troopers began turning cars around, the northbound overpass collapsed, and the repentant drivers were saved.

This lends context to this word from Jesus: I tell you, no! But unless you repent, you too will all perish. Luke 13:3

Jesus calls everyone to repentance. But why do we need to repent? Well, we’re in danger. But why exactly are we in danger? Because we’re wrong. Because something that seems good to us isn’t good. We’re mistaken. Our thinking is mistaken. Our choices are mistaken. We’re wrong. And partly wrong people must repent or face serious consequences. And Jesus is the official flagging us down and warning us to turn around.

Partly wrong people must be prepared to repent every single time God shows them that they’re wrong.

Every single time. Now, you may have thought that repenting is something you do once—you know, that singular foundational decision you make to turn from a life of doing things your way and choose instead to trust Jesus and follow His way. You’ve thought repentance is that one point at which you turn to enter into the kingdom of heaven. Boom. Your repenting days are over.

Make no mistake, that first step you take to follow the way of Jesus is pivotal, and it re-shapes the course of your life. But it begins a journey of allowing the instruction and commands of the Father to re-shape you time and time and time again. It launches you into a life of repentance in which you repeatedly discover thinking or choices that don’t fit the way of Jesus. At each point, you repent. You shift what you think is best to what He thinks is best. You shift your behavior to match God’s behavior.

This repenting we do regularly. Why? Well, because we’re partly wrong. Having turned to follow Jesus, some of our ideas are good and right. Some of our behaviors match the heart of God. Others don’t, and as we discover those, we must change to fit God.

That is what we should do, but we are tempted to do something very different…and very dangerous. It’s so common and so serious that God specifically warns against it in the Ten Commandments. The problem is that most people read right past the command, thinking it’s for someone else. So, here’s the word almost no one thinks is for them.

“You shall not make for yourself an idol in the form of anything in heaven above or on the earth beneath or in the waters below. You shall not bow down to them or worship them; for I, the LORD your God, am a jealous God… Exodus 20:4-5

Before I go any further, I want to talk about God being jealous. Let’s be honest. Doesn’t that sound like a bad thing? When we think of the word jealous, we might think of someone who is paranoid, over-protective, selfish, and controlling. That’s one dimension of jealousy and it’s an ugly, destructive thing. But jealousy isn’t always negative. The New English Translation has this note: “The word ‘jealous’ is the same word often translated ‘zeal’ or ‘zealous.’ The word describes a passionate intensity to protect or defend something that’s jeopardized.” God gives commands one and two because He’s passionately concerned about our well-being.

In the first and core command, God requires that we love Him above any other deity, person, or thing. God requires that we put him in first place in our lives and decisions–not because He is power-hungry–but because putting any other person, thing, or deity in first place will jeopardize us. It’s for this same reason that He gives us command two: don’t make an idol of God and worship it.

And this is the command we always skim by. Why? Almost no one reading my words has formed a god figure out of wood or clay and bowed down to it. So we think something like: This is for those people in “superstitious” countries that form figures to worship. On to command three.”

Hang on. Do you really think that God’s core concern is carving little figures, a trivial little instruction only directed to some countries you think are a bit primitive? Let’s think more deeply here. What’s the big deal?

What happens when you craft a “god” statue or figure? You make him the way that you want him to be. If you want him to be a harsh rule-giver, you shape him that way. If you want a doting grandmother-type, you shape her that way. You make a god who fits you. You make a god who pleases you. The core danger of crafting a god is the deadly idea that the shape of god is ever something you decide. I would summarize the third command this way:

We’re making our own gods, American style. How audacious and insulting and dangerous it is to make God like we want Him to be. When Moses encountered the booming voice of God in a fiery bush, He asked what God called himself. What is your name? When people ask, what should I say? God’s answer: “I am that I am.” He did not say, “I am whoever you decide I will be.” God isn’t clay that must give way to us. He’s a rock to which we must give way. We dare not glibly decide who He’ll be.

So, what should our response be? What does it look like to let God reshape us? We must follow and surrender to God as He is and acts in the pages of the Bible. We must let Him say who He is. We must see and trust His actions. We must heed His warnings, not dismiss them. We must bend to His instructions.

Jesus taught us to pray to the Father: “Your will be done,” even when it is hard or we do not fully understand. It’s only as we surrender to the God Who Is that we can be saved. Partly wrong people like us must be repent-ers who allow the reality of God to reshape us, and not the other way around.

I gotta be honest. I get concerned when I’m talking to someone, and it seems like God agrees with them on everything. Everything they’re for, he’s for. Everything they’re against, he’s against. Gun control. Abortion. Immigration. Pornography. Divorce. By some remarkable coincidence, God has exactly every view that they have. It seems like nothing God says has ever made them uncomfortable. I want to ask: Is it possible you’ve made god into who you want Him to be?

Almost thirty six years ago, I asked Joy out for our first date, which turned into another date and then another and then a deep friendship. I loved being with her; I loved being close to her. I read in the pages of the Bible and in the words of Jesus that sexual intimacy was designed for marriage, designed solely for that committed relationship. Honestly, I wanted that not to be true. I didn’t understand such an instruction. What’s the big deal? It seemed like there was no real harm. I disagreed with God, but I decided to let Him shape me (repent) rather than me to re-shape Him to fit what I wanted. That was very hard, but Joy and I have never regretted that.

If God agrees with you on everything, it could be that “god” is simply the person you see in the mirror each morning, a god who never thinks differently, never challenges you, never corrects you, and ultimately never saves you from yourself. Remember that the god who’s no bigger than you can never save you.

So, give some thought to this question. Does God agree with you on everything? When you read the words of God and encounter something you disagree with, do you change your thinking or behavior(repent) or do you get out your clay and change your god? The clay should be in His hands, not ours. It is the partly wrong who need re-shaping and not God.

[Feature photo by awsloley at Pixabay.com]

For each weekday of the month of July (and Aug. 1-3), I am blogging a chapter from my book, Partly Wrong, to be published this fall. This blog is chapter fourteen. I welcome any feedback that will help to make it a better chapter.