justice and mercy peace and reconciliation people and places

Philando Castile and the Things We White People Say 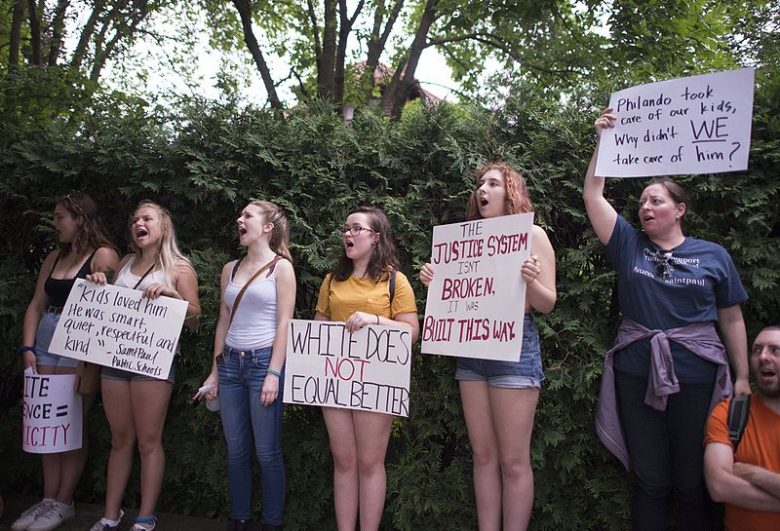 A police revolver rings out.  Several times.  Another black man in America bleeds out.  Most all agree that these killings are a terrible tragedy.  And we–my white brothers and sisters and I–wanting to be helpful, offer our counsel.  These deaths could be prevented.  The story can end up differently. If only the black man had done something differently.  There is a reason this ended badly.  But it doesn’t have to in the future.  Do these simple things, and the story will end differently.  It’s as simple as that.

But I wonder if we white folks have anything left to say after Philando Castile.

Get a job, we say.  People who aren’t working are asking for trouble.  Those are the ones likely to get into criminal mischief.  Help your own cause by getting good honest work.

But Mr. Castile had been working for the St. Paul School system for 15 years, where he had been hired upon graduation from high school.  He had been promoted and was serving as the Nutrition Services Supervisor at J.J. Hill Montessori Magnet School.

Don’t break the law, we say. Sure, that Michael Brown thing was unfortunate, but hadn’t he just shoplifted some cigarellos?  And Eric Garner?  Well, you know he was selling cigarettes illegally.  He just should have been keeping the law.  Never mind that no white parent I know would ever want his unarmed child killed by an officer after shoplifting, cigarette sales, or drug possession.  Still we say, just keep the law and all will be fine.

But Mr. Castile hadn’t broken the law.  He wasn’t fleeing a crime scene.  He was just driving around with his girlfriend and her four year old daughter.  He wasn’t even speeding.  Oh, his car did have a faulty brake light, so the officers pulled the black man over.

You should be able to own a gun to protect yourself, we say.   We need more open carry states.  Possessing a gun is your right.  It can protect you from some criminal element. It might save your life, we say.

But it didn’t save Mr. Castile’s life.  It cost him his.  The simple mention of it led officers to immediately draw their guns.  One of them shoots him seconds later.

Be respectful, we say.  God has graced me to have many black friends who have welcomed me into their lives.  I have heard them, with shaky voice, tell me how they lecture their kids about how to respond if an officer ever approaches you.  They are passionate and persistent because they understand the stakes. They think about it often.  They pray their child will never be pulled over, though he/she eventually will be.

But Mr. Castile did just what his mama told him to do.  Police video captures audio of Mr. Castile calmly saying, “Sir, I have to tell you, I do have a firearm on me.” (cbsnews.com) He’s calm, not angry. “Sir.”  The term of respect we teach our children to use. He calls him sir!! He tells the officers he has a gun.  He is not required by law to mention this, but it is respectful.  It is wise.  Respect and calm will defuse the situation, we tell him.   Only it doesn’t.

But it’s not that simple.  Mr. Castile followed Mr. Graham’s advice to the letter.  He did what he was told. He stopped immediately.  He gave the officers what they asked for.  His voice reflects respect for authority.  He addresses the officer as “Sir.”  Seconds later, the officer fires repeatedly.

But the officer who shot Mr. Castile was acquitted of all charges.

Forgive me, friends, but it feels like we have only one thing left to say.

[I encourage every reader to watch the Netflix Documentary, 13th.  I intend for this post to create thought and conversation.  Feel free to share your thoughts in the comment section.  Please be both honest and gracious, especially as you respond to the comments of others.]

PHOTO: Feature photo by Fibonacci Blue from Minnesota, USA – Protest in response to the Philando Castile shooting, CC BY 2.0, https://commons.wikimedia.org/w/index.php?curid=50019218