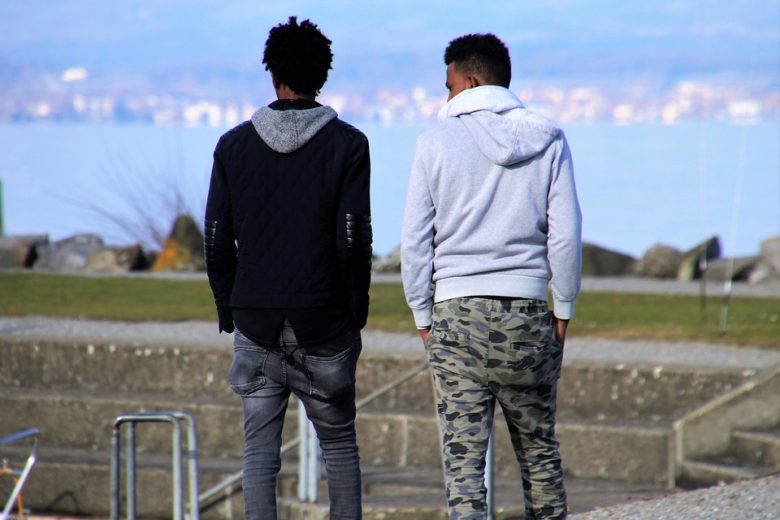 Every person on the planet needs the life and grace and peace and joy and hope and instruction of Jesus, and we who’ve found that in Him should tell others about him. I mean, how do we not talk about the best thing that ever happened to us? How do we not share good news? And so the Bible says:

I like the tone of the word “persuade.” Some understandably react to a word like “preach” or “convert,” which may imply arm-twisting or haranguing. But every person who has ever lived tries to persuade. Children do. “Mommy, if you let me buy it, I’ll be good all day. I promise. Pleeeaaase!” Adults do. “Please give me your keys; you’re in no condition to drive.” Persuading is a part of life. For Christians who have found hope in Jesus, it makes sense that we persuade others to embrace that same hope.

In churchworld, we call it evangelism, a term that stirs mixed emotions in me. It has the beautiful inherent meaning of sharing good news, but the shine has become tarnished. Bible teacher, Steve Brown, says: “We are just beggars telling other beggars where we found bread.” That’s sounds like good news, but it can subtly morph into something less good: “We’re right people telling wrong people how we got it right.” And that doesn’t come across as good news. Reading through the pages of the Bible, I find it more appropriate to say:

The attitude of our heart is so critical, and so the Bible challenges us: “But in your hearts revere Christ as Lord. Always be prepared to give an answer to everyone who asks you to give the reason for the hope that you have. But do this with gentleness and respect.” (1 Peter 3:15, NIV)

We’re to talk about Jesus with gentleness and respect. Here’s where awareness of our partly wrong can help us. In the conversation about our hope, we’re one partly wrong person talking to another partly wrong person. Or if you prefer. We’re one partly right person talking to another partly right person. When it comes to talking about our hope, there’s the tendency to believe I’m all right and the other person is all wrong. I remember hearing an evangelism instructor make that very point.

There are some parts of the good news of Jesus that you don’t fully understand nor live out. And the person you are talking to, made in the image of God, is right about some things where you’re wrong. A number of years ago, it dawned on me that some of my non-Christian friends reflected more of God’s heart for the poor than I did. I had things to learn from them. When I sit down to talk about my hope in Jesus, I must remember: I have some things wrong and my friend has some things right.

C.S. Lewis writes: “If you’re a Christian you do not have to believe that all the other religions are simply wrong all through. If you are an atheist you do have to believe that the main point in all the religions of the whole world is simply one huge mistake. If you’re a Christian, you’re free to think that all these religions, even the queerest ones, contain at least some hint of the truth.” (C.S. Lewis, Rival Conceptions of God, Book 2 According to Scripture)

Jesus, in conversations with people, seemed intent on finding what people had right and affirming that before addressing what they might have wrong. A lawyer asked Jesus how to have the hope of eternal life. Jesus immediately asked him what he thought. When the lawyer said that we should love God with all of our hearts and love our neighbor as ourselves, Jesus affirmed his answer. He then addressed the lawyer’s wrong idea about which neighbors to love.

A wealthy executive asked Jesus the same question about how to gain eternal life. He expressed a high regard for the Ten Commandments, something Jesus affirmed before exposing a love for money that was greater than his love for God. Jesus entered into a conversation with a gal from Samaria. (John 4) She had right ideas; she believed in a coming Messiah. She had wrong ideas about God and worship, which Jesus later corrected.

Jesus was the only “fully right” human to ever walk the planet, and still he didn’t talk to people as if they were entirely wrong. He had conversations, not lectures. He listened and asked questions. He blessed what they got right and challenged what they got wrong. Even in intense conversations with some Pharisees, he affirmed things they got right while strongly rebuking their error. Dare we talk to people differently, partly wrong as we are?

An “I’m all right and you’re all wrong” posture is not only mistaken, but it’s arrogant and repulsive. It feels like a trip to the principal’s office. Give an answer for your hope with gentleness and respect, God reminds. With gentleness, as someone who doesn’t have it all figured out. With respect, as someone who has something to learn from the other. Do you really believe you have something to learn from every person you encounter? Does that come through in how you talk to people? I love these words from Dallas Willard:

“If I, as a Christian, am going to debate someone who is a non-Christian, I want to be able to put my arm around that person’s shoulder and say, “we are looking for the truth together, and if you can show me where I am wrong, I’ll take your side. I’m not there to beat someone into submission. Jesus never worked that way.” (Dallas Willard, The Allure of Gentleness)

An arm around the shoulder. I love that image. A couple of partly wrong people talking together about how Jesus can make us right. A conversation, not a lecture. Listening, not simply talking. Here are a few thoughts as to how we can talk about Jesus as partly wrong, fellow-learners.

Evangelism, in most of my churchworld experience, was mostly about talking. Most questions we asked simply set the table for our next point. Questions were less about getting to know a person and his/her story than they were about identifying wrong ideas to correct. I am over-generalizing, I’m sure, and I know that the sharers cared about the people they talked to, but I’m not sure the approach always conveyed that love. If we love the people we’re telling about Jesus, it makes sense to love them by learning their names and hearing their stories and listening to their ideas. Xavier Amador asks: “Why would anyone want to listen to you if he felt you had not first listened to him?” Exactly.

Like Jesus, let’s build off of what others get right. Are you talking to a Muslim? Like the Samaritans in Jesus’ day, they have right ideas. Some Christians use parts of the Koran as they explain the story of Jesus. In discussion with people, you will surface right things they believe about the power of love, the need for justice, the existence of God, the brokenness of our world, the struggle to do right, or a belief in eternity. As you learn what people believe, you may also be able to show them that some things they believe or practice are in fact more consistent with the Christian narrative than their own. You may also learn places where you are wrong.

Talk honestly about where you and other Christians have gotten things wrong. Share wrong ideas you once believed. Talk about your own arrogance or stinginess or judgmentalism. Acknowledge where the Christian church hasn’t reflected the heart and example of Jesus in our racism or harshness or materialism or hatefulness. This is both honest and endearing—identifying as partly wrong people who’re still in need of learning and being changed.

And now we can talk about where we believe our friend may be wrong. Wrong ideas matter, especially when it comes to the way of Jesus. Where my friend disagrees with Jesus, he/she is mistaken. Love demands that I challenge wrong ideas, just as Jesus did. We, who are partly wrong and have had to repent countless times, must call others to repent—or change their flawed ideas, as we’ve done and continue to do.

Here’s where a conversation grounded in compassion, gentleness and respect is so critical. Jesus, in talking to the dear Samaritan woman, said, “You Samaritans worship what you do not know.” It was a bold, corrective word, but Jesus had been a caring listener who obviously valued her and her ideas, and ultimately she received that correction and embraced Jesus as the way home to the Father. It’s far easier for someone to hear a corrective word when they know they’re respected and loved.

We have one advantage that Jesus did not have. We’re flawed and have had to repent ourselves. Remembering and admitting our own flawed ideas can become a compelling catalyst for someone else to do the same. Partly wrong people have a wonderful platform to help other partly wrong people come home to the Father.

[Feature photo by pasja1000 at Pixabay.com]

For each weekday of the month of July (and Aug. 1-3), I am blogging a chapter from my book, Partly Wrong, to be published this fall. This blog is chapter eighteen. I welcome any feedback that will help to make it a better chapter.