Jesus and God people and places 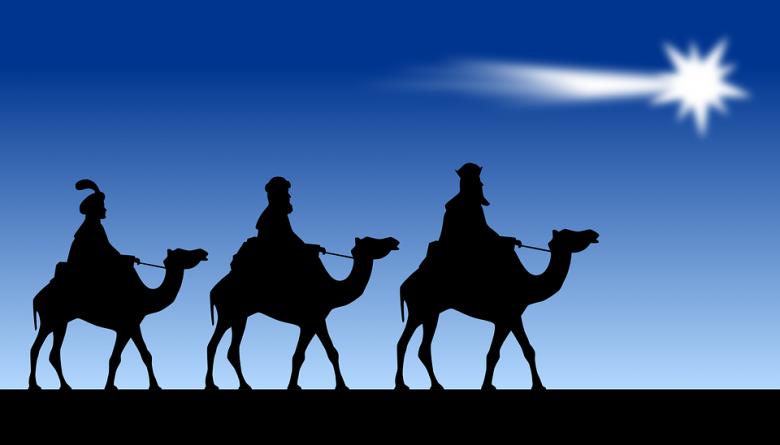 The Bible’s Christmas narrative has a villain. An antagonist.  A bad guy. And I’m not talking about the innkeeper.  The bad guy is King Herod.  The good guys are those wise men who traveled weeks to find Jesus. The good guys and the bad guy meet in Matthew, chapter 2:

After Jesus was born in Bethlehem in Judea, during the time of King Herod, Magi from the east came to Jerusalem and asked, “Where is the one who has been born king of the Jews? We saw his star when it rose and have come to worship him.”  When King Herod heard this he was disturbed, and all Jerusalem with him. (Matthew 2:1-3, NIV)

When King Herod heard about the birth of Jesus, he was disturbed.

And that is exactly the emotion that Christmas should surface in people.  Herod got it.  He saw what others did not see.   Herod never heard the word Christmas, but he understood its meaning better than most.  Even church-going worshipers celebrating a birthday in December sometimes miss what Herod realized.  If you’re paying attention, Christmas is disturbing, because Jesus is a threat.  What does he threaten?  I’ll let Herod answer that: “Uh…he’s a King.  Maybe you missed that part. You bow to a king.  You surrender to a king. He tells you what to do; it’s not the other way around. You can’t have two kings.”  Herod may well have heard about the word from the prophet, Isaiah:

For to us a child is born, to us a son is given, and the government will be on his shoulders. And he will be called Wonderful Counselor, Mighty God, Everlasting Father, Prince of Peace.  Of the greatness of his government and peace there will be no end…” (Isaiah 9:6-7, NIV)

Jesus didn’t come as a President, elected by the will of the people.  He came as a King who would rule the people. You don’t vote on a king. You just do what he says.  Jesus’ very first message was simple: “Repent because the kingdom is here.” The wise men were looking for a king, and they were right. Jesus came as a King.

The problem is…somebody was already sitting in the king’s throne.  Herod was disturbed because he was the king. He called the shots. He decided what was best.  He did what he wanted to do.  And he liked it that way.  And when he got word that someone was coming as King, he thought, “I will not let that man be king over me.”

The problem with Christmas is always the King.  I’m not talking about Herod. I’m talking about Jesus.  Jesus was a problem for Herod just like He is for me.  Jesus was disturbing for Herod in the same way He is for me.  You see, somebody is already sitting in the king’s throne.  That would be me.  I make the calls in my life. I decide what is best. Oh, I’ll listen to the advice of others from time to time, but my life is my kingdom, and I decide what is right and good and best for my kingdom.  I’ll even decide what is best for other people, but I will not let them do that for me.  A king decides for others; they don’t decide for him. I am the king.  And the message of Christmas is that the King has been born in my kingdom. This is disturbing.

Jesus tells an intriguing parable about a man who is preparing to come back to his land as the new king.

Christmas is disturbing because it forces a decision: Will we let Jesus be our King?

There were wise men who traveled what may have been months at great cost with these words “we have come to worship him.”  Some believe these men were actual kings, which inspired the Christmas song, “We Three Kings of Orient Are.” If so, you have a fascinating picture here. One group of kings came to surrender to the Christmas King, and another king said, “No way. I will not have this man to be my king.”

Christmas is disturbing because it confronts every one of us kings with the question: Will you surrender to Jesus as King?

Christmas is wonderful if it’s just about giving and receiving gifts.

Christmas is adorable if it’s just about the birth of a cute baby.

Christmas is touching if it’s just about being together with family.

Christmas is comforting if it’s just about having a companion who understands you.

Christmas is encouraging if it’s just about someone coming to rescue us.

Christmas is disturbing if it’s about a King to whom you must bow and surrender.

To be sure, Christmas is a rich, beautiful, layered story.

Christmas is about God WITH. He is Immanuel, come to walk with us in our suffering.

Christmas is about God FOR us. He is the Savior, come to save his people from their sins…but…

Christmas is about God OVER us. He is the King, come to rule the world with truth and grace.

God with us and God for us are easy to talk about at Christmas. They are comforting. But we dare not leave out the disturbing part of the story that Herod understood.  Jesus is King. As such, He isn’t simply asking us to play our drum or give our gifts or see him in a manger lay.  The King asks us to trust Him and follow Him and love Him with everything we have…just like some wise kings did.  And one foolish king didn’t.

Perhaps the best way we can honor the King in this season, then, is to obey the hard things He has asked us to do: forgive the one who has wronged you, give generously, respect your parents, pray for your enemies, proclaim the good news of Jesus, give thanks in everything, honor your leaders.  Let Him be King where you least want Him to be.