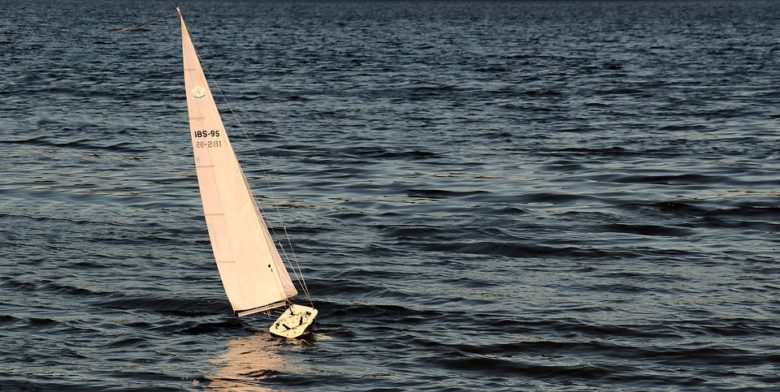 There is something magical about sailing. I love the classic Christopher Cross song by that name, and I have always harbored a sailing fantasy. Imagine, then, the moment years ago, when I discovered someone on Craigslist was giving away a Sunfish sailboat. I snatched it up both for the thrill of sailing and the thrill of zero dollars. I was now the bona fide owner of a sailboat. I could see myself sitting in the sailboat, one hand on the rudder and the other hand holding a rope attached to something important, the wind blowing wildly through my hair. I was a sailor.

Not long after, I traveled with friends to Sebago Lake in Maine for a week of vacation together as families. Of course, I brought the sailboat for its maiden voyage on the wild and unpredictable seas of Sebago. After some Google research on sailing, I knew things like starboard and aft and jib and such. One fine morning, two friends, Brad and Warren, joined me for an exploratory trip. We eagerly climbed into the bobbing craft, paddle and snacks in hand. A dozen yards from shore,we practiced a few maneuvers to insure we could sail with the wind and into the wind. Satisfied with our skill, we headed out into the expansive lake, riding a decent breeze. Sailing was everything I dreamed it would be!

Before long, the breeze was breezier, pushing us further from shore. It was time to head back into the wind, something we had done easily before. Our boat, however, was not nearly as responsive as it had once been. Perhaps a stiffer wind, an overloaded boat, and water in the hull had something to do with it. No problem, of course, because I was a sailor with quality mates. However, in the wrestling with the suddenly obstinate craft, we failed to see our oar slip into the waters. I can still see that oar getting smaller—we unable to steer the boat toward it—until it vanished in the choppy water.

The wind was now creating waves, pushing us steadily from the shrinking shoreline. We were, of course, going to be able to turn this thing around, but there was a greater sense of urgency. The sky was darkening, and the lake, once full of dancing seacraft, was now nearly empty. At one point, a boatmate jumped into the water, grabbed the back of the boat and attempted to push the craft by kicking his legs. Yes, we tried that! Shivering, he was soon back in the listing craft. Each futile attempt to head into the wind was exposing our ignorance and inability. I remember a particularly disturbing thought. Perhaps we should flag a craft for help.

About that time, a much larger sailboat glided effortlessly near us. The relaxed occupants were sipping wine as the wind pushed them toward their destination. I suddenly wanted to be in their boat. This was the perfect chance to ask for help: an idea, a suggestion, a hand. Only we didn’t. We smiled and waved nonchalantly, as if we had planned to bob helplessly in the waves.

Why is it so hard to say we don’t know something, that we are in over our heads, that we need help? I’m pretty sure I am not the only one.

I am in a conversation with someone about his car problem, and he mentions a solenoid, something that sounds like a planet to me. I have no idea what it does. So, what do I do? I smile knowingly, and say, “I always hate it when the solenoid goes.” Really, Roger?

So, let me get this straight. I don’t want this person to know that I don’t know something, when he already knows I don’t know things…lots of things…millions of things. I am ignorant. About loads of things. And so are you. The problem is that we usually equate ignorant with dumb, so when we don’t know something, we feel like we are stupid. I am uncomfortable with the word “ignorant,” as if it is an indictment, but it’s just reality. All of us are ignorant, even the most celebrated genius or Jeopardy show champion. Not one of us could even handle all of the knowledge in the world; we don’t have the brain capacity. Ignorance is core to the human story.

The Bible states what we all know intuitively: “We know in part.” (1 Corinthians 13) We don’t know it all. We know partly. We don’t understand it all. We understand partly. There is stuff we don’t understand, and there is stuff we don’t know, and that is great! You know why? It opens countless opportunities for God to teach us something. Our ignorance—our partly-wrong-ness—should pull us like gravity to read or listen to the words of the Bible, where our ignorance will be reduced in the places that matter most.

And so the songwriter, David, reminds us:

Ignorant, we need knowledge. Partly wrong, we need correction. Simple, we need wisdom. Blind, we need light. This should take us to learn from the knowledge and wisdom and heart of God. He loves to teach the partly wrong, but He also wants us to learn from others as well. Our ignorance creates a wonderful opportunity for a parent or friend or neighbor or even a stranger to teach us something.

Let’s rewind my conversation with a friend about his car problem and the solenoid. Start the video again, and this time why don’t I instead say something like: “Time out. A solenoid? What does that do and how do you replace it?” I’ll tell you what will happen. My friend’s eyes will get a little brighter as he begins to explain something he knows to me. People love it. Of course they do. You do too. It feels really good to know something and get to explain it to someone else. Talk about a win win situation. They get the joy of sharing their knowledge, and you get to be a little less ignorant.

Now, here is what happens when we disguise our ignorance. We rob ourselves of the chance to learn and we rob someone else of the chance to share their knowledge, all in an effort to make it look like we know everything, which no one believes anyway. What the what?

So, here is what I have begun doing. I actually look for opportunities for someone to teach me something I don’t know. I look for a chance to admit my ignorance. Someone mentions an R.O.U.S. in casual conversation; I stop and ask them what that means. I’m eating a meal at someone’s home; I ask them how they fixed that particular dish and what’s in it. I see someone working on something in their garage; I ask them what it is they’re doing or fixing. No one ever turns that kind of question down…unless, of course, what they are doing is illegal.

I recommend that you practice putting these three words together and speak them out loud: “I…don’t…know.” I would just practice saying it right now. No, seriously. Right now. Just say, “I don’t know.” Say it again. Try different inflections. See, that’s not really so bad. Then throw in a “could you help me?” O.K., that may be pushing it.

So, what happened out on the wild Sebago sea? Well, as the clouds threatened to drop thunderbolts any moment, we spied a motorboat zipping by us toward our tiny shore. We began to wave wildly, shamelessly, eventually catching their attention only at the last minute. They came alongside, and we mumbled something about them possibly helping us get our boat to shore.

You know what? They loved the chance to help. They tied us to their vessel and towed us back toward our shore. As I recall, a hundred yards from shore, we asked if they would release us to go in on our own from there. After all, there was no need for the family to see us being towed in to shore. They might worry! (Sigh. Perhaps we hadn’t really learned our lesson after all.) Would they release us early? They laughed. I think their exact response was, “not a chance.”

[Feature photo by pixel2013 at Pixabay.com]

For each weekday of the month of July (and Aug. 1-3), I am blogging a chapter from my book, Partly Wrong, to be published this fall. This blog is chapter 4. I welcome any feedback that will help to make it a better chapter.