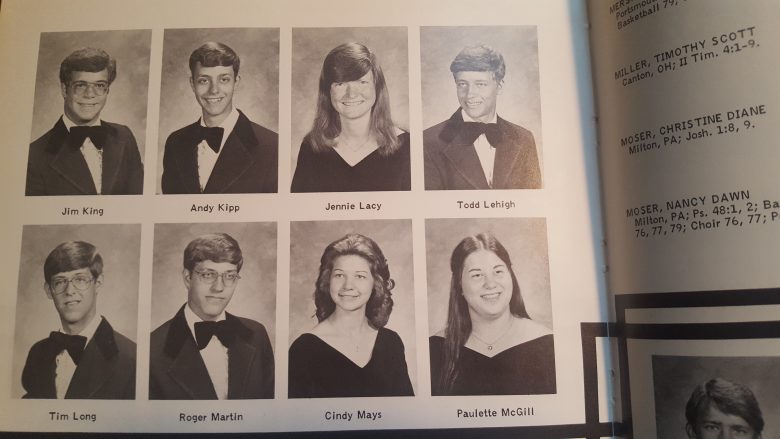 Hi Roger. Please don’t freak out, but I am your 57-year old self, and I’d like to share some things I (we?) have learned about you and the black people around you that you barely notice.  The good news here is that you’ll make it to your 57th birthday. The bad news is that you know far less than you think you do.  That’s why I’m writing to you.

Congratulations on entering your final year of High School with 84 other seniors.  There are no black students in your graduating class. Zero. I tell you this because you’ve never noticed, or thought about it, and won’t again for several decades.  You’ll eventually realize how special so many of your high school friendships really were, and you’ll actually be able to connect with many of them via Facebook, which is…not really a book at all, but…you’ll find out.  You have many special friends, but not a single one is black. This is a terrible loss, but you have no idea.

The truth is that you don’t have any meaningful interaction with black folks, and you haven’t since fourth grade. Do you remember that year? You had a black teacher at your public school, Highland Park Elementary.  Mrs. Garrett. The next year, you were transferred to a private school, where almost every student looked like you, and it has been that way for the last 8 years. Private School. Church. Neighborhood. Mostly white.

Remember that job you got last year, the one at the grocery store?  That was exciting. You went in, filled out an application and got hired on the spot.  You think that’s exactly how it works with everyone. Every nice kid who wants work and turns in an application gets interviewed and gets hired, whether the name on the application is Roger or Tyrone.  You’re wrong.  You don’t know this because there are no Tyrones and LaToyas in your circle of friends to tell you their stories.  Decades later, you will hear their stories and be stunned.

You don’t use the n-word, and you never will. Good for you. Your parents raised you to talk respectfully to people, and you mostly do this, except—ironically–with your parents sometimes. You need to work on that.  You don’t think about racial prejudice one bit, because it’s obviously not an issue for you. After all, you like Sanford and Son and The Jeffersons on television, and Dr. J is your favorite basketball player.  But you have flawed ideas and assumptions about black people that are never challenged because you don’t actually interact with black folks. You think you know more than you do.

The truth is this. Almost everything you believe about black folks comes from watching the news and TV shows and listening to the conversations of your family and friends.  They are good people, but most have about as much meaningful interaction with black folks as you do.  You think Martin Luther King Jr. was simply an agitator and an adulterer, because that’s the primary narrative you hear. So, renaming a street in Chattanooga after him seems unwarranted to you.  One day, you’ll believe that he pre-empted a kind of second Civil War in America.  You’ll read his biography to your children. Seriously.

Your great grandfather was a Klansman and his father was a slave owner, though you’ll never actually hear this from your family.  Your grandfather is nice to blacks and preaches that we should be, but in written materials, he has defended segregation, rationalized some Jim Crow laws, denounced interracial marriage as wrong, strongly discouraged racially mixed churches, and maintained that whites are more intellectually and morally advanced than blacks, though he believed this could change. He loved God, as you know, but these ideas, woven into the fabric of your family, have influenced you in ways that you cannot see.

You believe that everything has been getting steadily better for black folks since Emancipation.  You know nothing about black codes, lynchings, and post-Reconstruction voter laws that purged up to 90% of black voters from the rolls of some southern states.  You’ve heard nothing about vagrancy laws which enabled black men to be imprisoned for not having a job (read: not hired by a white person), at which point they could be leased out as full-time labor for the railroad or plantations.  In your lifetime, just 3 hours south of where you live, peaceful black protesters have been beaten by police while white onlookers cheered.  It will be 20 years, or more, before you ever read this history. Right now, you aren’t concerned about black history because it doesn’t really impact your comfortable world. Or so you think. My heart breaks for you.

My heart is also hopeful. One day, God will grace you with black friends who will change your life for good in ways you can’t imagine. Your thinking and understanding and compassion and worship and spiritual character will be enriched in those relationships. You’ll learn new music, though you’ll never have rhythm—ever–but your attempts will be a source of great entertainment. Your new friends will extend overwhelming grace to you. They’ll entrust you with their stories and their hearts even though very little in their history suggests they should ever trust a white man.  Great-great-grandchildren of slaves will love and embrace and trust you, the great-great-grandson of a slaveowner.  And you will take steps to love them as yourself. And God will smile, because He had the dream long before Dr. King ever voiced it.

“For he himself is our peace, who has made the two groups one and has destroyed the barrier, the dividing wall of hostility, by setting aside in his flesh the law with its commands and regulations. His purpose was to create in himself one new humanity out of the two, thus making peace…” (The Bible, Ephesians 2:14-15, NIV)